Here we go. This is your full results and judging report from Winterclash 2019.

Criteria:
Qualifications – Jam format
The riders are divided into groups of 5-7 people and are skating simultaneously during a jam for given time – usually 4-5 minutes. The goal is to prove him/herself and showcase his/her best tricks, maneuvers or general ability on blades. This could be a number of strong single hammer-tricks, a consistent flowing line or something really innovative, UNSEEN and CREATIVE. Based on the performance, a number of riders will advance to the final. The number of people advancing from each group is not fixed. Sometimes 4 people will advance, while in other groups no one will be advanced to the next round. These decisions are based on points given by the judges.

Finals – 5 minutes jam + last trick
In the finals, the qualified riders will skate in a jam-format. A jam-format is all riders blading together over a period of 5 minutes. In addition to the jam, each rider is given 3-4 attempts to perform a final trick, also known as the ‘Last Trick’.

3rd place – Lauric Picard (Switzerland)
Lauric was a prime example of a blader putting thought into his final run. A big start with a big hammer (Outspin Soul on the hardest obstacle – Grindhouse Extension Box) Nextup he tagged each of the main spots with a clean trick (Royale on the biggest rail, Soul to Dark Top Pornstar on the Whale (Loco box), and a Magic trick on the Kaltik Extension and nice final line: Disaster Back side unity on the small GH grindbox, followed by grabbed Backslide down the rail and fakie 540 on the quarter.
Final Trick: Magic Trick – GH Extension

2nd place – Danilo Senna (Brazil)
Brazil powerhouse Danilo definitely got the biggest tricks during the session. 450 Bs Royale on the GH extension followed by a Misty Flip on the bank. Skate Pro rail was hit with a 450 Bs Royale. Truespin Mizou on the Kaltik extension followed by another flip on the quarter (Back to Back). Linking all those big tricks together helped him make right to the top of the junior competition. His final trick was landed in 3rd attempt (540 True spin Mizou on the GH extension) and it earned him a beautiful 2nd place on the podium.
Final Trick: 540 Truespin Mizu on the GH extension

1st place – Felix Fälling (Denmark)
Felix had the highest consistency rate of his division. Only one trick missed in the whole run. Getting confident with the obstacle (small GH grindbox) with Top Acid all the way Up, followed immediately with Top Soul Up to Soul (small GH box to rail) transfer caught the attention of the crowd. A quick Top Acid to Bs Royale on the biggest rail and great creative approach to getting the speed in the corner section to launch for a disaster Dark Makio on the Kaltik extension. Felix was the only one to grind the big GH grindbox from the bottom (Top Acid) and finished with perfect, grabbed Darskide Makio on the “Big Whale”. His run was a great mix of good flow, solid tricks and an incredible finish with a crazy Soul stall that awarded him the 1st place.
Final Trick: Soul Stall on the “Pottier” rail

3rd place – Manon Derrien (France)
Manon focused mainly on coping tricks – she started out doing a big Alleyoop Top acid on the GH extension and a really long, grabbed Ao Fishbrain on the coping below. A steezy Fakie Sweetstance on the kinked coping and Truespin Topside Xgrind on the highest quarter pipe. Having a hard fall on the big handrail last year didn`t stop Manon to land a sweetstance there for her final trick. More variety in the choice of spots and tricks would help to achive a better ranking, but the style and difficulty was definitely enough for the podium.
Final Trick: Sweestance (Big handrail)

1st place – Mery Munoz (Spain)
Mery`s mix of different tricks on all spots left the judges with a ‘no brainer’ decision. She started with grinding the Loco ‘Whale’ box with Top Soul to fakie, immediately followed by a very solid sweetstance on the Kaltik extension. A true mizu at the GH handrail and a few smaller grinds on SP rail (Soyale) and a sick fakie 540 Mute on the quarterpipe (spins with grabs are not so often seen). Only one fall/missed trick during the whole run. The final trick made a huge impression on the judges and the crowd in general – first try Top Soul to Royale transfer – one of the hardest trick by a bladie during the contest so far!!
Final Trick: Top Soul to Royale transfer (flat rail transfer to big handrail)

3rd place – Michael Witzemann (Austria)
Michael didn’t go big or crazy tech this year but since this amateur competition turned out to be more strategic than just hammers (most contestants generally had a hard time landing tricks). Michaels lines and clean tricks were better than the others. Darkside grabbed Makio on the Loco Whale got the attention of the judges right from the start. This followed by torque soul on the Kaltik extension and disaster kind grind the SP rail. A long grind on the GH rail with a triple switch up variation (Backside Up to Bs Savana to True spin Makio Down) raised his difficulty while backsiding the Roces launch to fakie and solid Torque Soul on the Loco Whale landing all the way to flat. All of these tricks combined filled up his creativity score.
Final Trick: Torq Soul to Flat (Loco Whale)

3rd place – Maxime Genoud (Switzerland)
Speed and confidence was the distinctive feature of Maxime`s run. Crazy start with ‘mach3‘ big Top Soul to Soul transfer on the GH extension, followed by even faster Fish brain all the way over the Loco Whale (in the opposite way than anybody else – he started from the launch at the front of the obstacle). This followed by a quick line with a huge air from the Roces box making a connection with a flawless 720 on the way back. Clearing the whole gap of the GH extension with big Top Acid to drop. A few tricks was not landed along the way, but the Final Bs Farv Up the GH box to 540 out all the way over the platform made it clear that Maxime deserved the 3rd place.
Final Trick: Bs Farv Up the GH box to 54 out over the whole platform

2nd place – Dominic Bruce (UK)
What a show from Dominic – one of the most creative approaches of the course. This while still going big and being consistent. Heel roll up the Roces box connected with a disaster 540 Bs Savana on the SP rail – this being a great example of his unmatched mix of creativity and tech blading. A big 540 transfer over the GH extension and an unique switch up at the long rail (Xgrind 360 Xgrind) was also a great compliment to the park. Unfortunately Dominic – probably – broke his arm while Disaster 540 True spin Top Pornstar attempt. This didn’t keep him from seding an incredible Wall ride to fakie (3rd try) as his ender – that amazing performance awarded him the 2nd place in overall ranking.
Final trick: Disaster Wall ride to fakie (Wall near the Loco Whale)

1st place – Joe Atkinson (UK)
Joe`s crazy performance makes it really easy for judges to put him on top. From dropping into the park ground (from the judges` balcony) as a start just to get speed to grind the whole Kaltik extension or a 270 Bs Royale Transfer from the GH quarter to Roces vertical rail – there was simply no trick or idea in Joe’s blading that we had seen from anybody else. With one exception: the super clean 540 Flat spin transfer – all of his tricks were original, big, new and unique. Furthermore Joey didn`t stop – at all – during his run. Most of his tricks was followed up or were a part of a continuous line. He is unquestionable the king of the Roces vertical rail spot – Royale Up to Full True spin Mizou down and eventually Backslide Up to Stall on the edge of the rail (on the same spot). His performance left us speechless. And if that wasn’t enough – Joey ended the show with a royale on the balcony barrier to 270 out landing fakie into the steep roll in. A well deserved 1st place without any hesitation from the judges.
Final Trick: Royale 270 out (Balcony barrier to Roll in below)

USD Best Trick: Joe Atkinson (UK)
Trick: Backslide Up to ice pick at the pointy end of the Rail 270 out to fakie (Roces Wall-Rail)

SkatePro Most Creative Trick: Eugen Enin
Trick: Bs Farv Up – No Future Air (legs in the air on both sides of the rail) – Royale Down (SkatePro rail)

Thank you for making this Winterclash a great competition to watch and to judge!

All the best,
Friederike, Basza and Michael 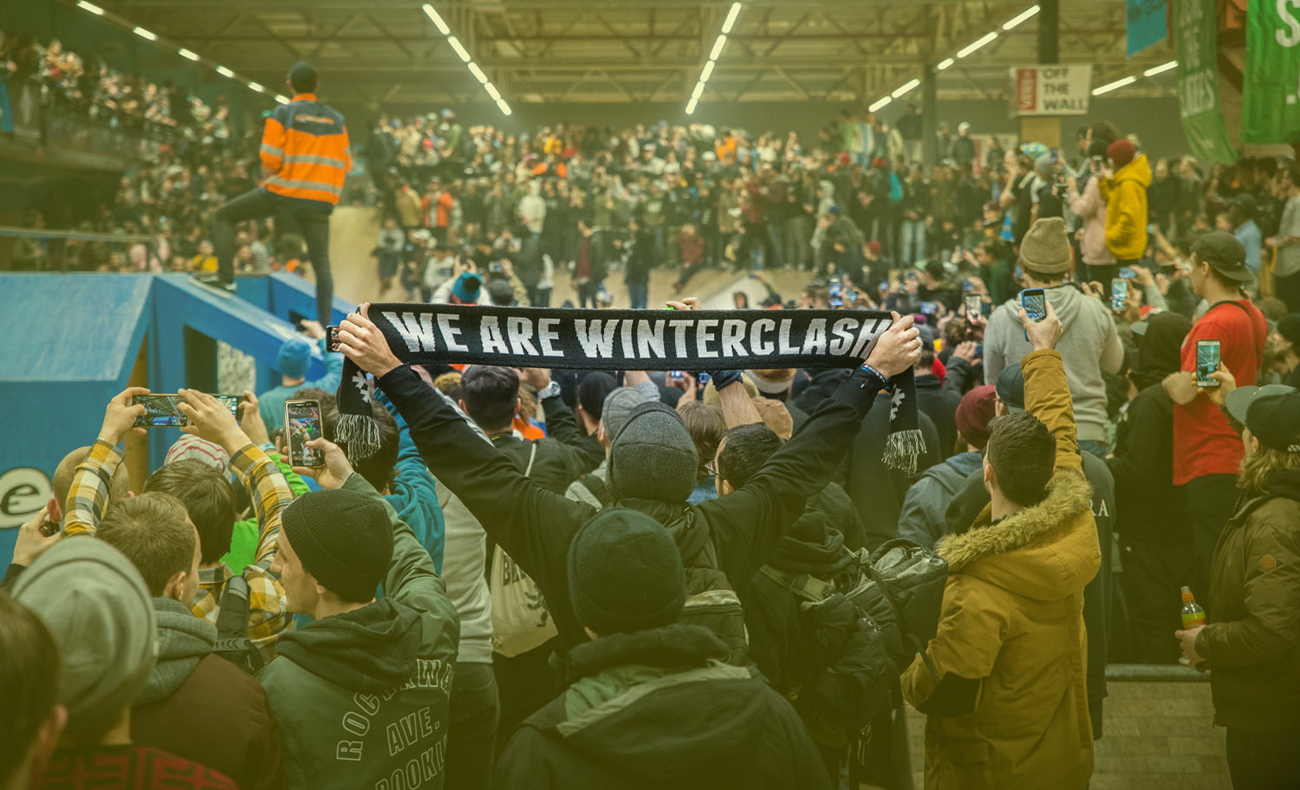 The App is available! 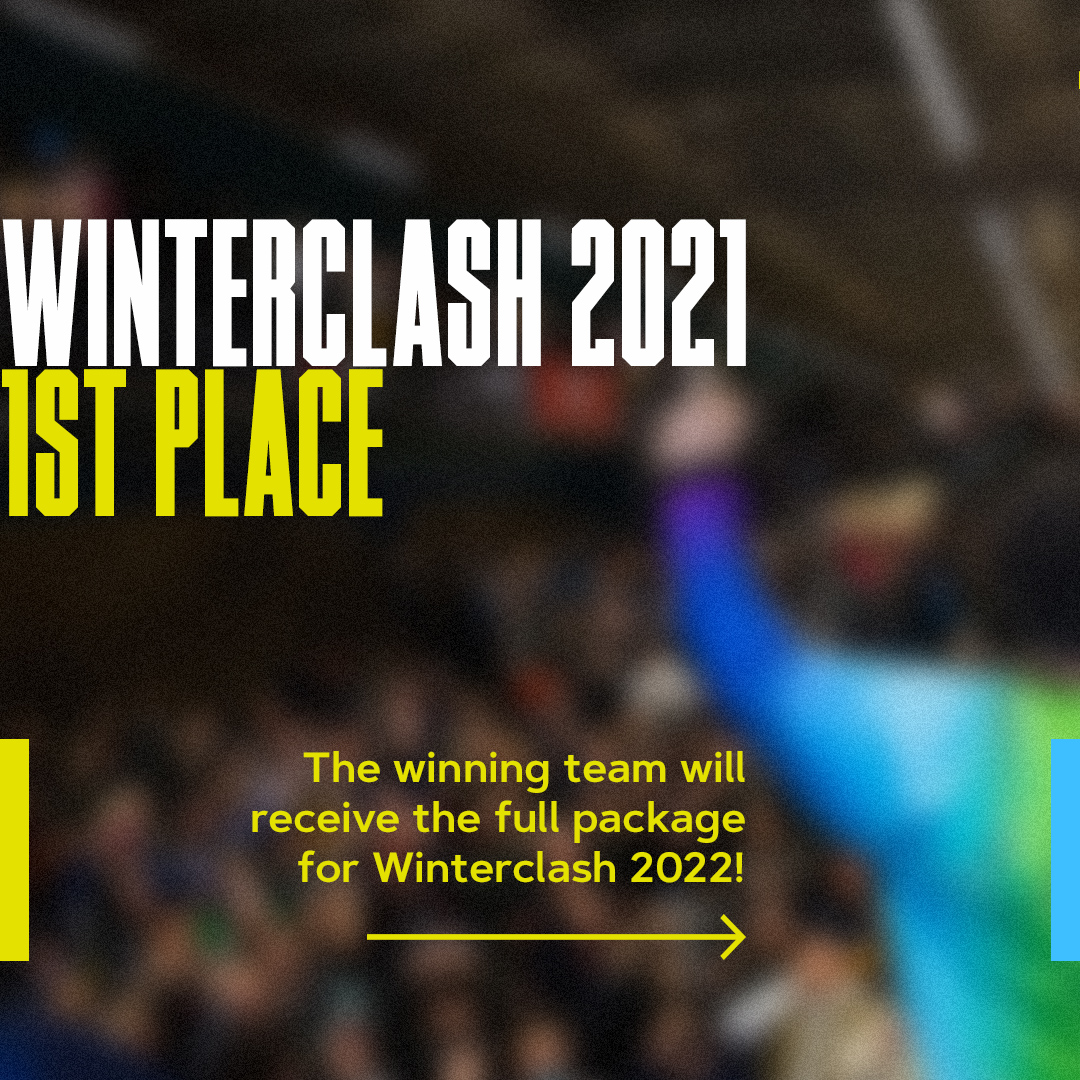 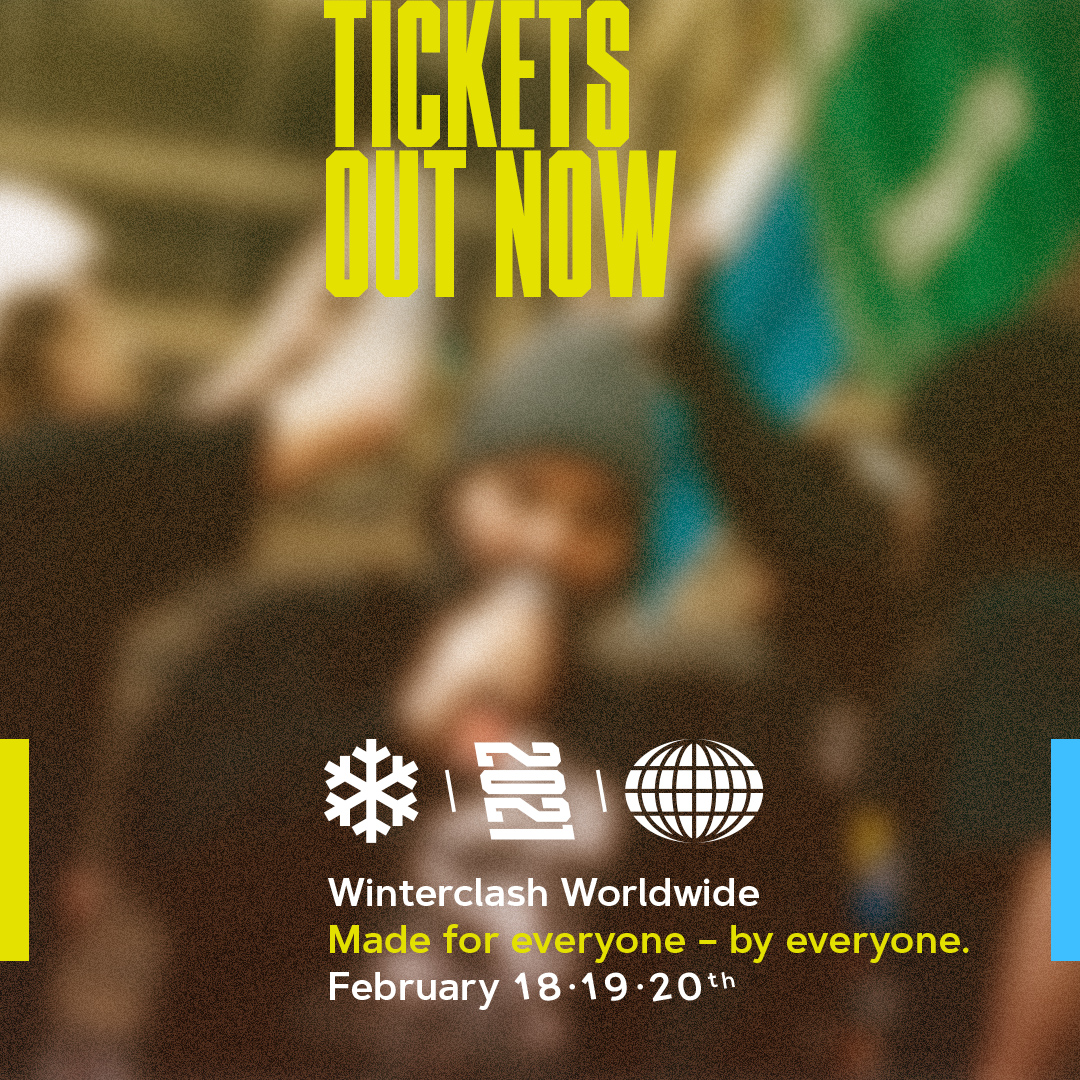